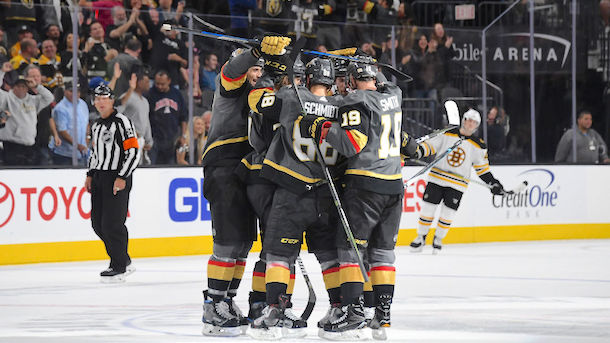 Prior to the Golden Knights’ game against the Bruins on Saturday, they tweeted out their opponents’ lineup, only they replaced all the first names with female names. 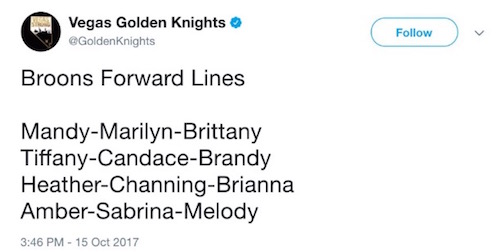 Apparently nobody in business ops told the social media team not to offend and alienate 50% of the team’s paying customers. Luckily Twitter stepped in to fill the leadership void:

You do realize this whole line of tweets is awfully demeaning to women. You are clearly insinuating that males > females.

So, the joke is that the other team is all girls? Please delete this it’s very embarrassing.

The Vegas Golden Knights are aware that they’re a professional hockey team now and not a hateful meme factory right?

The Vegas Golden Knights social media account is maybe the most annoying in pro sports. Even before tonight.

NHL: Hockey Is For Everyone!
Golden Knights: Wait, let me reference a racist franchise movie and make sexist jokes

But here’s where this story really gets crazy. Instead of immediately deleting the tweet and apologizing for the error in judgement, the Golden Knights tried to justify the joke by explaining that it’s a reference to a not-universally-beloved movie: 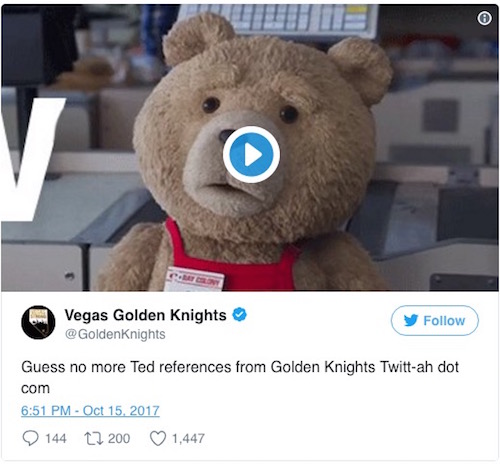 As of Monday morning, the original sexist tweet and the one explaining it had finally been deleted. However, the Golden Knights have yet to acknowledge they ever existed, let alone issue an apology.

The Golden Knights’ hot start has been one of the best stories of the nascent NHL season. Somebody in their PR department better get the social media team under control before they ruin it.

‘Roddy Piper: In His Own Words’ Documentary Trailer (Video)

Tim Cook Taking Ricochet Shots All Over the...

Has the SNKRS App Worked for Anyone? Ever???

Getting Divorced and Quitting Your Job for Martin...

Mickey Mouse is Welching on a Mountain of...

Can Billionaires have Midlife Crisis?

Journey through a Dream with The Weeknd and...