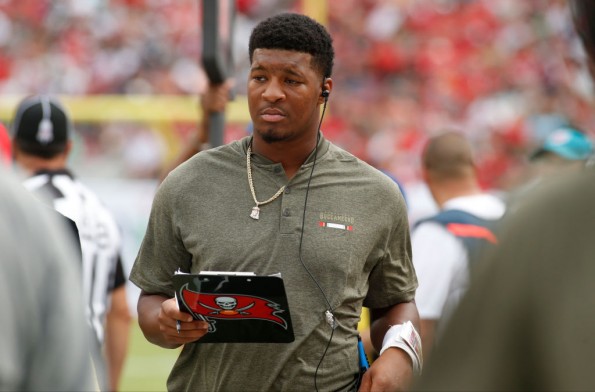 For the second time in 5 years, Jameis Winston is being accused of sexual misconduct.

On Friday, Buzzfeed News dropped a bombshell that the NFL is looking into an Uber driver’s claims that the Tampa Bay Bucs QB grabbed her crotch while in her car in March 2016.

Buzzfeed also claimed that NFL investigator Lisa Friel sent a letter to the accuser letting her know that the league would be opening the case.

“The League has been informed that you may have been the victim of such a violation perpetrated by Tampa Bay Buccaneers player Jameis Winston,” she wrote, “The league takes allegations of this nature very seriously and has opened an investigation into this matter.”

Kate, as she is referred to keep her identity hidden, stated she picked Winston up around 2:00 a.m. in Scottsdale, Arizona on March 13, 2016. He was the only one in the car and for whatever reasons on that night, he began yelling yelling gay slurs at pedestrians before demanding that they go pick up some food.

While waiting at Los Betos Mexican Food, Kate says Winston reached over the seat and placed his hand on her crotch for “three to five seconds.”

Kate later stated she became empowered to speak out after a slew of women have came out and accused various hollywood stars of sexual misconduct over the past few weeks.

“I have been empowered by my sisters who have forged this path by speaking up, and I must do my part to make it a little more well traveled,” Kate said to BuzzFeed News. “If I’m silent, I fear that further harm will come to other women, if it hasn’t already.”